In Our first prototype, you are fully able to use the 4 Weapons we have on offer to use vs our Targets, Stationary and Moving on our firing range, Please Enjoy your time, Any feedback on the Project so far Will be Greatly Appreciated.

Press "E" To interact with Items

Press "Q" To Throw items to the floor

Press "R" To Reload your Guns

This a great start for the game, the mechanics are very good and the controls are simple and easy to understand. I really like the guns in the game as it gives the player a variety of choices when it comes to what gun they would like to use, the level design is good also, as it reminds me of boot camp training mission in games like Call of Duty. However, I believe that adding hands to the weapons will make them feel more realistic as it will make it so the player is holding the gun rather than it floating in the air, with this you could add a recoil so that the guns are not that easy to shoot as well as giving the player the ability to look down the sights of the weapon as I felt the targets were too far away to get a good shot on target. Other than that, great game!

Your bullet hit markers remain after the target is destroyed

The sandbags have no colliders so nothing to stop me walking up to a target to shoot it. Equally, there could be a barrier at the entrance to each range meaning players have to engage targets from distance.

Pros: Easy to understand controls, the shooting and reloading mechanic were good and the targets moved at a variety of speeds (which added a challenge which I felt was also good), the moving trees and grass was good that added a sense that there was a wind blowing through the area, the environment itself I felt is a good starting off point (if you plan to take this game further), the bullets holes were also a good idea (though I feel when shooting the grass, the holes shouldn't look the same)

Things I felt needed improvement: Once you've dropped a gun the ammo count still shows on the screen, you can shoot (and 'kill') the targets despite not holding a gun, the sounds of the last gun gave me a scare because of how loud it was (that may have been my fault though), there is no sound/music (except for the guns, footsteps (the sounds of jumping and landing need a tweak because they sound a bit off to me) and the main menu wind sounds), the Settings and Credits don't work (though that might be added later), the guns don't face the reticle and they even move direction when moving the camera up and down.

Conclusion: I do like this prototype and I like the direction you're going for, however, I find that there are still some issues that hold it back a tad. A five or six out of ten for me. 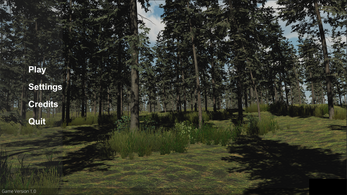