A downloadable game for Windows

Any Feedback would be appreciated..

The game itself is a cool concept, I like the fact that when you look at the book, it comes up on the screen. I like the look of the files on the desk as it gives character to the player like they are working hard. However, I found the game to be a bit empty as there was nothing to see or do other than look at the book. Adding music will be a good choice too as the atmosphere felt quite plain. Other than that, I believe this is a good start and you should keep working on it.

The office was great, the detail from the pile of books, the spinning fans. The lighting felt a bit off for me though that's a nitpick that shouldn't take away from the design of the office. The light shining from the desktop screen was a very nice touch. Everything else though I feel the office was empty, the mechanic from the book on the table (next to the lamp) held nothing. Maybe that should have held a note of some kind, I don't know, but that does come out as a surprise to me. I missed it the first time I played the prototype, so I think you could have added a timed note on screen, or another object (like a post-it note) to go near the book. Another problem is the audio, there's none. Maybe just a piece of low elevator music to play while the player is moving around the office. Even footsteps would break up the monotony of the prototype.

the office room was really nice, the detail was great, i especially like the surreal bright light coming from the windows that make it seem like a dream. im not sure if there was anything i could interact with but i couldnt find where to go next and fell out of the map. i wouldve liked some kind of audio, maybe a background atmospheric track or some footsteps. maybe some things on the wall in the hallway would have made everything feel much more alive. 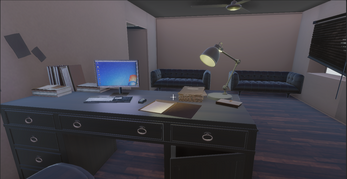